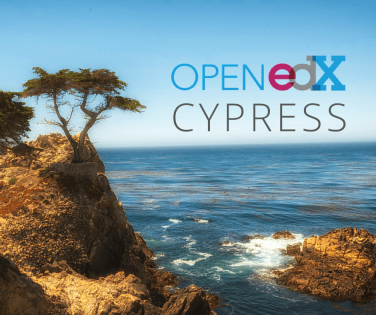 We are pleased to announce the release of Cypress, the third release of Open edX, the open source online learning platform that powers edX.org as well as hundreds of other online courses around the world. To get it now, please see the Cypress installation instructions.

This release is absolutely jam packed with new features and improvements that have been developed since the release of Birch in January, including:

For a full list of changes, check out our meticulously compiled release notes. If you’re running Birch, we also have instructions to help you migrate to Cypress.

Some statistics about this release:

Thanks to everyone who has been a part of edx-platform core development in the past six months. We couldn’t have done it without you!

We strongly encourage everyone in the Open edX community to begin their upgrade to Cypress immediately. Unfortunately we cannot currently support multiple releases simultaneously, so Cypress is now the only supported Open edX release. This means that security patches will no longer be released for Birch. We will continue to support all of the upgrade infrastructure from Birch to Cypress, to aid your transition.

The next Open edX release, Dogwood, is slated for a late-November release. Stay tuned to this blog, the edx-code mailing list, or our Twitter account for more details. Keep up to date about the progress of the Dogwood release on the Open edX wiki.

Dogwood is shaping up to be a large release with many necessary dependency upgrades, so we encourage all users to migrate to Cypress now and make plans to upgrade to Dogwood as soon as it is released.

If you want to learn more about what people have built with the Open edX platform, don’t forget to register for the Open edX Conference!

Open edX Con aims to bring together site operators, extenders, and users for two days of presentations, demonstrations, and socializing. We can’t wait to see you all there!

Introducing the Test Team for Olive and Beyond