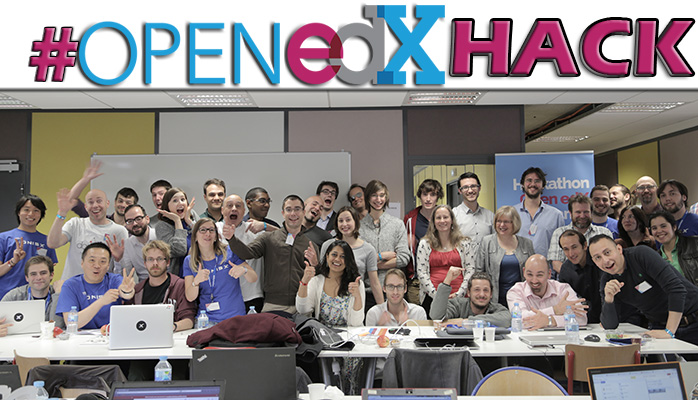 On May 29 and 30, 2015, I had the pleasure to participate as an “event-helper” & jury in the largest-ever Open edX hackathon, held in France, and organized by OpenedX, IONISx (the digital learning arm – built on the Open edX platform – of IONIS Education Group, which includes the largest computer science schools in Europe), and France Université Numérique (the national provider of Massive Open Online Courses, MOOCs, also built on the Open edX platform). The hackathon gathered a community primarily composed of developers, who “hacked” the open source platform for two days by developing new features for it.

This unique event not only generated useful and compelling contributions to Open edX project, but has also potentially ushered a more active international Open edX community.

A success by many measures

Impressive in its scope, OpenedXHack gathered around 180 participants in a total of 8 French cities, and the 7 finalist groups showcased talent from 5 of those cities. Attendees overall included a mix of developers, teachers, instructional designers, MOOC enthusiasts and others from the educational technology industry.

A launch event at the prestigious Sorbonne on May 28 gave stakeholders the opportunity to explain why they chose to use the Open edX project. The commitment of the leading French-speaking MOOC providers to the platform, including the French Ministry of Higher Education and Research, has strengthened the position of the Open edX platform as the favored learning management system in France. 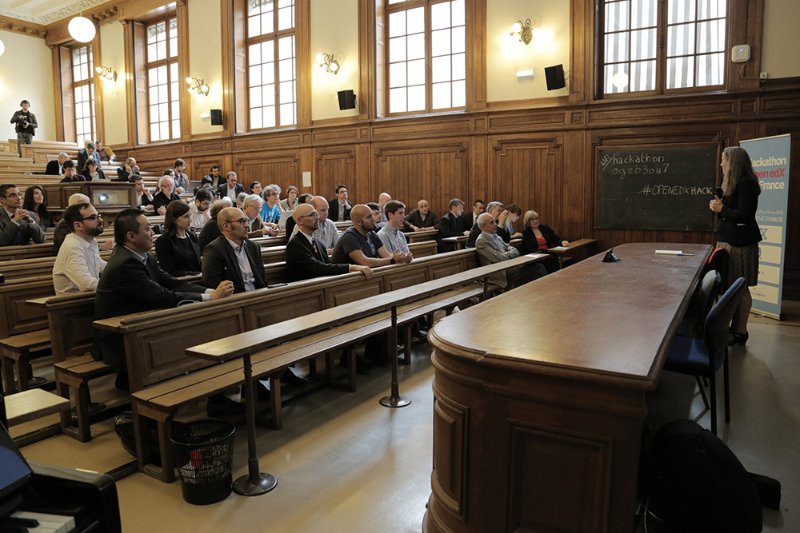 Launch event at the Sorbonne

The importance of #OpenedXHack was also marked by the attendance of six edX team members, including Beth Porter, VP Product at edX, who all traveled to Paris from Boston to help the coders and learners develop features in six areas: activities, data analysis, design and user interface, mobile, system administration, and video. This was an unprecedented demonstration of edX’s support to the international Open edX community. In a sense, this Open edX hackathon was an experiment for the non-profit company in the feasibility of organizing a developer-centered event outside of the United States. 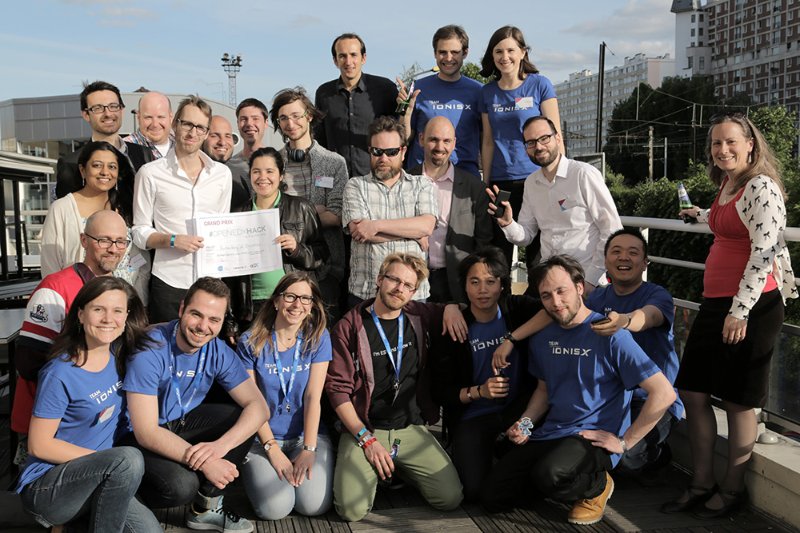 edX, IONISx, FUN and the winners

The projects: new and innovative features for the Open edX platform

From among 21 projects, thirteen working demos were presented to the hackathon’s 18 jury members.

The winning project embedded quizzes directly into course videos, a feature that has been long awaited by teachers and learners alike. The international team, called Gutenberg & Brussels, was composed of three developers from Gutenberg Technology in Paris, and one from the Université Libre de Bruxelles in Belgium.

The six other finalist teams were:

These projects confirm current and emerging trends in education technology, especially toward interactivity (avoiding passive content), personalization (tailoring the learning experience to each individual) and accessibility (being able to browse a course from any device, not having to download large video files). 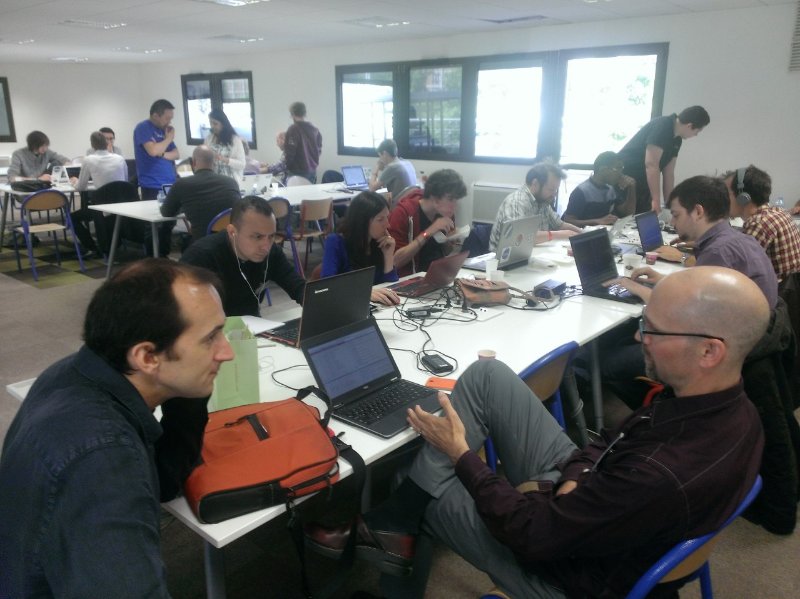 Hard work during the hackathon

Beyond its improvements to the Open edX platform, the hackathon was a fun, energy-filled, and inspiring event, punctuated by lighthearted exchanges between participants and staff. To cite a few examples: a team of two non-developers managed to make their way to the final through perseverance; the winning team struggled to install an Open edX instance for a whole day before scooping up the grand prize; an edX developer advocate showed hidden French roots by donning a beret for photos; cookie-muffin trades were made during lunch over python programming advice on Slack. More than 150 people used the chat program to communicate efficiently and have fun, and sent more than 6,500 messages in total. Meanwhile, the #openedxhack hashtag was tweeted more than 1,040 times in less than three days. 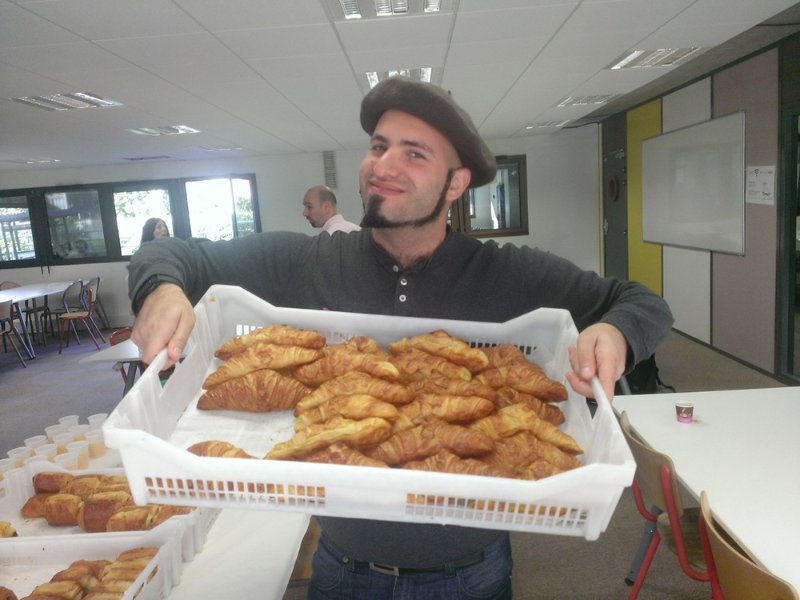 Developer advocate at edX by day, French baker by night!

Overall, the event was a success, both in terms of contributions to the Open edX community and – the organizers hope – in terms of paving the way to a global network of hackathons that would bring together talents around the world to advance the Open edX platform and e-learning in general.

Written with Maggie Oran from IONISx

Shaping the Future of Education Together